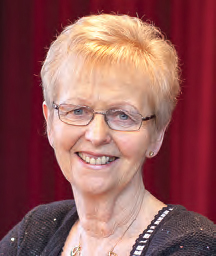 Beth Porter: What led you to do peace work?

Ruth Patterson: Most of my adult life has been shaped by the open conflict between 1968 and 1998 in Northern Ireland and its aftermath. Many decisions I took or ways that “chose me” were determined or influenced by that conflict. The path had many shadowy sides but, as with anything else, it was two-edged and those of us who journeyed through that time with a certain degree of awareness were gifted with so much that we might not have acquired in any other way.

You write about reconciliation and restoration. How are they different?

When I think about reconciliation the phrases that come to mind are “walking together again” or maybe “discovering the gift we are to one another”—either rediscovering it or discovering it for the first time. Restoration implies some sort of healing or journey towards wholeness. The two are inextricably interlinked, but for me the word “restoration” resonates more with a spirituality.

On one level, human nature is the same everywhere and we start, as Jean Vanier says, with our common humanity. Suffering caused by a lack of recognition of the riches of diversity has been our lot in Ireland as it has been yours in Canada, though it has manifested in different ways. To my limited understanding, yours has been caused by what one might describe as an insensitive form of colonialism that looked on its way as the right way and maybe the only way for everyone. Ireland is part of the Celtic fringe that existed around a colonial power.

Reading about Aboriginal peoples here, I am struck by the similarities—the emphasis on community and storytelling, the richness of culture, the respect of nature, the wholeness, the spirituality.

In our situation two groups are struggling to present their way as the right way and their identity as the right identity. Because one group saw itself more obviously as those sinned against, there was the conflict and all the lack of understanding. But the struggle has been less about a sense of injustice and oppression than about two interests needing to reach a point of understanding— to grasp that there will be no winners and that success will be achieving a sense of mutual understanding and acceptance of one another. We are not there yet. We do have a peace process and there has been much change but I question how much transformation there has been.

You counsel people who have experienced hurt and breakage. They may say I just need to walk away; it is too painful. Or I don’t want to bother trying to reconcile. Or the other person may not want to deal with it. What would you say in such a situation?

First, I want to draw a distinction between forgiveness and reconciliation. The former takes one. The second takes two. While it can never be forced and is a process and a journey, I think that forgiveness is vitally important for one’s wellbeing, whether the other person ever accepts it or even wants to know. The one who is being damaged is myself if I hold on to the hurt and bitterness and refuse to forgive. Reconciliation is a next step and it may not happen because it takes two. But sooner or later in every conflict in the world people have to pick their way back over the debris of the broken relationships, the shattered livelihoods, the broken dreams, and dialogue. That is the only way forward and one of the first steps in reconciliation. And that can take years, even generations. We used to think that compromise was a bad word. Actually we need to redeem it and realize it is quite a holy word. There is a lot of give and take in it, and that is at the essence of mercy, justice, truth and peace.

Sometimes people may not want to reconcile because they feel they would be disloyal. For example children in a marriage break-up may feel that to be loyal they need to stay angry at the parent whom they deem to have been responsible.

I think every instance needs to be taken as unique. It depends on the person. If they have been very wounded no one else has the right to challenge them to let go of their anger and reach out. I think it requires a great deal of courage to reach out to the one who ostensibly is in the wrong, and yet that is part of the cost and the loneliness of peacemaking, where you’re identified with neither individual or group, but have stepped a pace beyond. That puts you in a kind of no man’s land, but that is a cost that almost has to be is borne by the peacemaker. There is a great difference between a peacemaker and a peace lover. The peace lover will stay with the one partly because of not wanting to cause hurt but also partly wanting to safeguard their own position.

The biggest peacemaking journey I will ever make is the one within myself, so that I become a little more self-aware. Just as outside there are so many facets to community so there are to the community within, and very often the way we cope with life is to segregate the parts within us; whereas all the time I believe the call is to welcome back the exiled bits of our inner beings and to realize that I and everyone else are multifaceted personalities. I cannot become a peacemaker unless I also begin the journey toward recognizing that I am loved, because if we try to love our neighbour as ourselves when we don’t really love ourselves (and most of us don’t), the conflict will continue. I believe that every human being is called to sense that they are beloved because every human being is created in the image and likeness of God and what God makes, God loves unconditionally and forever. “Beloved” is an old word. If you break it down it is also a command. But to my mind it goes beyond a command and is a vocation, and the choice is mine whether I pick it up. Hand in hand with that goes a self-awareness which is vital to so much else.

You say gratitude is healing. How is this so?

Because gratitude has something to do with being able to receive. Most of us in caring professions can be great givers, but when you are a giver you can keep a distance from people.When you are a receiver you allow yourself to be open, vulnerable, to say I need what the other person is offering. In being open and allowing some of your brokenness to be seen there begins to well up a sort of healing which would never come if you kept the wall up and remained solely a giver. So I believe there is a mutual flow and that in itself is healing. It’s something about a generosity of spirit.

How was it for you being the first woman ordained in Ireland?

People largely stood back prepared to judge women’s ordination on how one woman performed, so it was very lonely. One saving grace was a sense of humour. On the night I was ordained there was a great storm and at the reception one clergyman announced that it was a sign of divine displeasure! A big danger, which didn’t thank God imprison me, was to fall into the Elijah trap—that “only I, I alone am left and they seek my life….” It helped to have the precious friendship of my father, also a clergyman and quite a visionary. And God places people along the way to listen and be supportive, as hopefully I would be for others. What sustains you in your work of reconciliation?

I recall Desmond Tutu being asked if he was an optimist. He replied, “Oh no, I am no optimist, but what I am is a prisoner of hope.” It’s no virtue of mine, but I would see myself as a prisoner of that hope. I have an enormous conviction that Ireland, out of its fragility and brokenness, still has the chance to show the world something through a restoration of that hospitality within ourselves, between ourselves, and with the whole created order, for which it is fabled. Because I was born in Ireland the dream of restoration is incarnated for me in Ireland, but it could be anywhere in the world.

Over the past months in Canada there have been notable failures in political leadership at various levels and also failures in leadership in corporate and other arenas. Jean Vanier is looked to as a Canadian social visionary and moral leader. The Globe and Mail has described him as “the country’s pre-eminent humanitarian” and, in 2008, named him “Nation Builder of the Year.” We reached him in France, where he continues to live in the original L’Arche community. – Beth Porter, ed.