What belonging, diversity, and inclusion mean to me

L’Arche Canada is launching an online reflection to Celebrate the Gift of belonging, diversity, and inclusion by listening to the voices of persons with lived-experience and those who share life with them.

Garrett Sinclair is a man with something to say. He’s also a man with an intellectual disability. He hasn’t always felt that people respect him enough to listen. “I didn’t like the way people were treating me.” But with the support of family and friends, Garrett has found the courage to speak up.

In September 2018, Garrett was a delegate to the L’Arche Canada General Assembly in Halifax. It was his first time at this large gathering of hundreds of L’Arche members and leaders with and without intellectual disabilities. In fact, it was the first time that delegates from the new L’Arche Fredericton project participated in a L’Arche Canada Assembly. 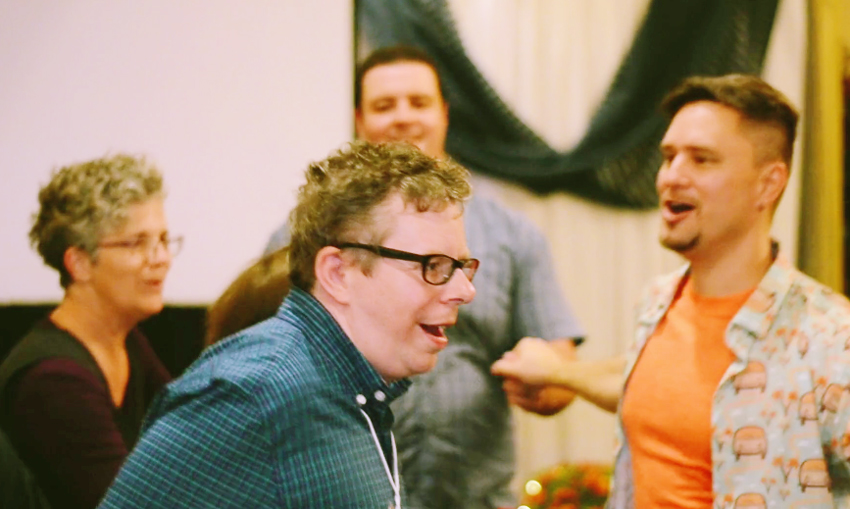 Above: Garrett enjoying the fiesta at the L’Arche Canada General Assembly

At first, Garrett found the gathering a little disappointing. He liked meeting people from all over Canada, but with all the Assembly business and celebrations, when would he have the chance to have his voice heard? Then Garrett took the time to head into “the studio” set up so delegates could share their thoughts on the themes chosen to Celebrate the Gift of 50 years of L’Arche in Canada. Under the lights, with a large microphone before him, the camera operator and interviewer giving him their full attention, Garrett finally felt that he was heard.

The Halifax studio was set up to meet a goal of the 50th Anniversary of L’Arche Daybreak and L’Arche in Canada. “Throughout this 50th year, L’Arche Canada will put a spotlight on the ways our vision and values respond to our world today, on what we are learning within L’Arche and with our partners that promotes the vision and practice of belonging, diversity, and inclusion.” We will do this in a variety of ways, yet we want to begin by listening to our members with and without intellectual disabilities.

Over the next six months, we will share some of what we heard in the Halifax studio through short clips on social media. We hope that these clips will be ‘conversation starters’ that get people thinking and talking about their own experience of relationships and belonging in community; about discovering and developing their unique voice and gifts; and about what happens when people who have been excluded from public spaces – such as persons with intellectual disabilities – take their place and contribute their ideas, gifts, and abilities.

In addition, we have chosen a few testimonies – including one by Garrett – to take a step further in that conversation. These longer clips will be incorporated into the Values campaign that L’Arche Canada launched with partners in 2017. The goal of this campaign is Listening to and amplifying the voices of marginalized people. “We believe that it’s not up to us to empower them, yet when they are listened to, their voices have power. We have the responsibility to transmit their voices publicly so that their lived experience, ideas, and learning contribute to the process of global social reflection and action for change.”

The image of the microphone reminds us of the power of the studio space (like the photo shoot space in Mon Ami Gil) in our culture as a space of inclusion. It was powerful to watch each person take the risk to sit centre stage, to be seen fully and share what is important to them. Most of the participants seemed to blossom under the lights and in front of the microphone. They were not looking for fame, but for us to pay attention to what they have to say, to value their contribution and share it with others.

In the studio, we asked each person to reflect on the gift of relationships and belonging; of developing their unique gifts and living with difference; and of people once marginalized helping build their communities. What we quickly realized is that these themes cannot be spoken of separately – they are deeply interwoven strands of what it means to be human. We hope that these reflections will be the beginning of real dialogue in your homes, workplaces and communities, as well as on-line, as more people take their place and contribute their gifts and voices.

L'Arche Calgary is recruiting a Director of Finances