A few years ago, I went with Mel Kirzner, a man with an intellectual disability who welcomed me to L’Arche in 1985, to visit the Maxwell and Ruth Leroy Holocaust Remembrance Garden at the Reena Community Residence in Vaughan. 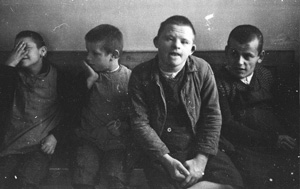 A few years ago, I went with Mel Kirzner, a man with an intellectual disability who welcomed me to L’Arche in 1985, to visit the Maxwell and Ruth Leroy Holocaust Remembrance Garden at the Reena Community Residence in Vaughan. Reena is an organization supporting persons with intellectual disabilities “within a framework of Jewish culture and values.” The remembrance garden honours the men, women and children with mental illness or physical and intellectual disabilities who were among the first victims of Nazi mass murder. It is important that we remember them and work to build a culture of respect for vulnerability and diversity in the human family.

In 1998, during a trip to the L’Arche Sledziejowice in Poland, I went to Auschwitz, the infamous death camps where over a million men, women and children were brutally murdered. They were mostly Jews though other people deemed undesirable also perished. It is deeply disturbing to visit the site of such cruelty and inhumanity, yet it is important that we remember the victims, their humanity as well as their deaths, and that we honour them by working to prevent such atrocities from happening again.

This experience was especially powerful because I went with Mel. Mel, who died in June of this year, was a Jewish man who had just had his bar mitzvah a few years earlier. After our visit to Poland, we would be going on to France then Israel. He was aware of the genocide committed against the Jewish people by the Nazis, yet being at Auschwitz made it terribly real. Usually outgoing and talkative, Mel became silent.

One of the first things we saw was the site of the gas chamber set up while the larger, permanent ones were being built. It had been moved from an institution where it was used to kill persons with disabilities and mental illness in the early years of the war. Personnel from the killing centres for the disabled were put in charge of the gas chambers at the death camps – a direct and terrible link between the two programs.

On hearing this, Mel was visibly shaken. He was born in 1942. If he had been born in central Europe instead of Canada, he might have been killed for his disability or for being Jewish. It was a lot to take in. For years afterwards, whenever we shared about this experience, Mel would say, “They had all the children’s shoes,” referring to a case of little shoes taken from the children. It was a simple remark said from deep within that captured some of the vast pain and loss that he would never forget.

These memories swept over me as I attended a lecture on the Aktion 4 – the Nazi “Euthanasia” Program, on November 3 as part of Holocaust Education week. Alanna Sheinburg and Ellen Rajzman presented a shortened version of the course that is taught at Reena to learn about and remember the “Nazi initiative that identified and exterminated people with mental, physical and developmental disabilities at killing centres, which were a precursor to the death camps.”

The presentation showed the ways in which years of propaganda by the government and medical professionals had convinced many people that individuals with disabilities were “unworthy of living,” a financial burden to society, and would be “better off dead.” These are some of the same argument being made today that threatens the lives of persons with disabilities and mental illness at every stage of their lives. It is important that we learn from the past, that we remember the victims, and that we work to protect vulnerable persons and create opportunities for them to flourish.

L’Arche Canada is pleased to announce that Roberta Andrade Carneiro will join the HR team as our new Immigration Administrator. Roberta will work with Stefan during August in order to have a good transition. Welcome Roberta!!!

Leadership Roles in Communities across Canada