Water—What Does It Mean to Us? An Interview with Luke Stocking 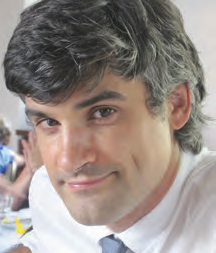 Beth Porter: Development and Peace has run major campaigns on the issue of bottled water twice over the past few years. Your work included Catholic schools. Why this issue, and what do you hope youth will understand?

Luke Stocking: We try to underscore that water is not a private good but is a com-mon good meant for everybody and essential to survival. To convey this message in Canada, we chose bottled water because it is a symbol of the privatization of water that people can connect to. Bottled water is, at its essence, the taking of God’s gift to everybody and turning it into a private good. We’re a national organization so we work with schools, churches, communities, right across Canada. My focus for the water campaign was on central Ontario. The action was to encourage people to create bottled water free zones.

Of course, we weren’t creating this movement ourselves. The bottled water issue has currency in wider society, and public schools and by other groups have also raised awareness. Our campaigns were a way to contribute to that movement. There was a point when suddenly, probably in the 90s, bottled water became trendy. Everywhere, people had their little bottles of water, and they started buying water for home use.

Yes, they became worried about tap water, even though public utilities are more regularly inspected than bottled water companies. The Polaris Institute produced some fact sheets which are on our Just Youth website. One is on social trends and bottled water. It talks about the advertising and spin corporations have created. Another is on the environmental impact.

As part of your campaign some students construct-ed pirate ships from plastic water bottles abandoned in their schools. Why the pirate theme?

It was a fun way to connect with the kids. The idea came from students in one of the schools—Pope John Paul II, in Scarborough—who called themselves “eco-pirates,” or “Pirates of the Water Commodification Resistance.”

On Bottled Water Free Day in March we had a big rally at the offices of the Toronto Catholic Board. Schools brought their ships, the students dressed as pirates, we “sailed” the ships through the building, and Board officials spoke. Then the student trustee that year, Natalie Rizzo, working with other trustees, produced the political will on the Board to turn the whole TCSB into a bottled water free zone. Of course, we broke down the ships and sent all to recycling, but the students understand that recycling is not a satisfactory solution. In fact, only about half of all water bottles are recycled, and the recycled plastic from water bottles is used to make cheap non-recyclable products.
Are there other aspects to your campaign?

We also call attention to bottled water as an international development issue because in many countries the only way to get clean water is to purchase bottled water. Water is privatized. This problem arises when the country loses control of its water. Sometimes this happens through international trade agreements or when countries are in debt. Greedy multinationals and corrupt officials can add to the problem. Sometimes it is the result of lack of political will or economic will to undertake the development necessary to have systems that can deliver clean and safe water to people through a public utility. Some of our partners, groups we support throughout the world, such as KRuHA—a network of grassroots organizations in Indonesia, are working on access to water and the need for public water utilities. Our staff saw what can happen when they visited a rural community in Indonesia that had lost access to the local spring because a bottled water company had taken control of the spring and was using it to bottle water to sell in the larger cities of the country. We cannot put water, especially drinking water, completely in the hands of the market.

When you say ‘not completely’, are you prepared for some market involvement?

From the Catholic Church’s perspective the fundamental principle is that delivery systems for getting drinking water to people must serve the common good. So it is theoretically open to some participation of the private sector. However, whenever there has been significant privatization of water resources, the poor especially have never benefitted. Of course special situations exist where bottled water or tanked-in water is the only way to get safe drinking water. The question is, from a development perspec-tive, ‘Is that good enough?’ At Development and Peace we are never against bottled water in all circumstances. The problem is when it becomes accepted as a system by which people will regularly get their drinking water for the long term.

This is hard work. What keeps you going?

I believe this is a calling, what God wants. Access to water is a spiritual issue. John Paul II said that some resources are so integral to human flourishing that they transcend market forces. In its representation to the Kyoto World Water Forum the Vatican quoted his teaching and pointed out that water falls into that realm. It follows that whatever systems we have for getting drinking water into people’s hands must serve the common good.

What do you hope for from our readers?

In a world where, according to the United Nations, at least 884 million people lack access to clean water—this is the number used by the United Nations when it declared access to water a human right—and 1.5 million children under the age of five die each year from waterborne-related diseases, we live in a country with the cleanest water in the world. I hope that they will take a moment to ask themselves, ‘What does water mean to me? And what is my attitude to bottled water?’ If drinking water is no different than Coke or apple juice or whatever, then by all means, let’s clap the bottled water industry on the shoulders for coming up with a brilliant idea to make tons and tons of money by selling us something that we can get practically for free. But if it is for all people, I hope they will ask, ‘Who are the people who do not have the same kind of access to water that I have? And how can I help them?

Acts of solidarity make a difference. Some people may scoff. It’s true, just taking a shorter shower doesn’t save a child dying of a waterborne disease. But it puts less stress on the local public water utility. And if everybody is doing that, it’s practical, and it also creates a reflection on values around water. Then those values can begin to be translated into our hopes and dreams and work through organizations like Development and Peace, so that others may have that same kind of access. It can lead to getting involved with an organization doing this kind of work or financially supporting its initiatives in parts of the world that lack of access to water.

For your information:
•    Development and Peace
•    Polaris Institute on water
•    Just Youth (D&P campaign)
•    St. FX student initiative in N.S.
•    Council of Canadians on “spin”
•    Blue Gold: The Fight to Stop the Corporate Theft of the World's Water, by Maude Barlow and Tony Clarke (2003)
•    Development and Peace International Programs
•    Indonesia: KRuHA (The Peoples Coalition for the Right to Water) is working to change a law passed in Indonesia in 2005 that favours privatisation of water. D&P in Indonesia.
•    The Water Project – a U.S. site educating about bottled water and raising funds for building wells in Africa

The Canadian government established the Truth and Reconciliation Commission of Canada because it finally had to acknowledge the great damage done Indigenous people by the government-supported residential school system. It has been said that just as the schools persisted over 7 generations, it will take 7 generations to heal the damage and for a truthful national story to take hold. It’s for our generation to begin. Dr. Marie Wilson is one of the 3 Commissioners who tirelessly travelled the country for 5 years recording the history of abuse. We are grateful to her for this interview. – B.Porter, ed.

This issue continues the interview with Commissioner Marie Wilson of the Truth and Reconciliation Commission of Canada. Dr. Wilson points to the multitude of opportunities that are set out in the TRC’s “Calls to Action.” The Commission will present its full final report to the federal government at the end of this year. Now, it falls to all of us who are Canadians to see that its recommendations are implemented—that we learn and teach the true story of the treatment of Indigenous peoples in Canada and that we do the work called for to bring justice, true reconciliation, and a good future for all in our country. – B. Porter, ed.

This does not permit us silence: An interview with Stephen Lewis

Stephen Lewis touches our deepest aspirations to build a better world. In this interview Stephen Lewis talks not only about his passionate concern for Africa but also about his own motivations and hopes and about democratic socialism today. - Beth Porter, ed.

Democratic Essentials at Risk: An Interview with Dr Ursula Franklin

In 2011, before the last federal election, we published this very popular interview with Canadian humanitarian and thought leader Dr. Ursula Franklin. Although some allusions reflect that particular time, much remains relevant. Hoping it will contribute to readers’ preparation for the upcoming election, we are re-sending it as a bonus issue with some new links and a box on Dr. Franklin’s 2014 CBC “Next Chapter” interview. Stephen Clarkson’s piece and the link to the Afrobarometer continue to remind us of the privilege we share living in a democracy, whatever its weaknesses (see Gordon Gibson, p.4, and link to Andrew Coyne’s Walrus article). – Beth Porter, ed.

Food and Community: An Interview with Adam Gopnik

The shared meal, whether at home or in a restaurant, is one of the great social pleasures of life, and probably one of the great civilizing influences in our world, but it is put at risk by the increasingly hectic pace of North American life. At the same time, as concerns about sustainability and our environment grow, many of us are thinking more about the quality, origins and preparation of the food we eat. We are grateful to Adam Gopnik, gifted writer, thinker and cultural observer, who draws several of these threads together. – Beth Porter, ed.