Mon Ami Gil is inviting you to share the stage! 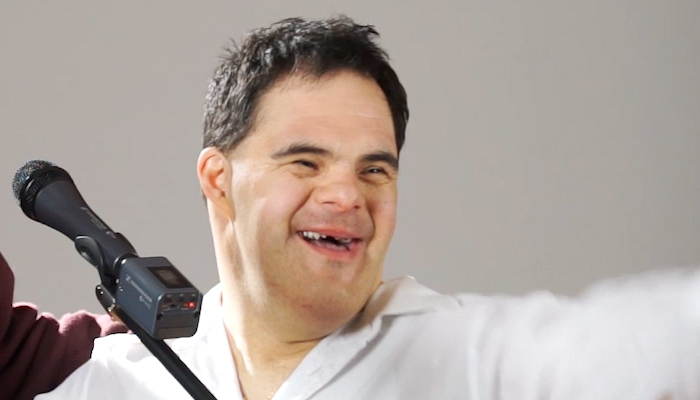 Thanks to all who participated in the launch of Mon Ami Gil on March 21, World Down Syndrome Day:

We are delighted that these experiences were shared with many people across Canada and around the world. This series began because we heard a request from Gil, a man who does not use many words, yet has lots to say. Gil wanted to be in front of the camera; little did we imagine how many cameras that would be – even Radio Canada. (Transcript below)

Following Gil’s lead, there will be further opportunities for members of L’Arche across Canada to also be in front of the camera and contribute photos or short videos celebrating their gifts for community.

We hope that like Mary Hillhouse from L’Arche Greater Vancouver last year, and Gil this year, we can find creative ways to “make known the gifts” of our people with and without disabilities contributing to vibrant community life.

Mathieu Nadon: Today is World Down Syndrome Day, and Marie-Ève, for this occasion, a very special web series will be launched tonight at the Gatineau Portuguese Community Centre.

Marie-Ève DuSablon: Yes Mathieu, because even if there are thousands of web series out there, none are like My Friend Gil, in which the main character has Down syndrome. That character is Gil; and we get a glimpse of his daily life, we discover his friends, and I got a chance to meet him a bit earlier today.

Manu Allard: It was completely unexpected… it’s not something we calculated, anticipated or planned for in any way. Usually you decide to work on one subject or another, but in this case, it was really… it was Gil’s request, the repeated and persistent requests Gil made. I must admit that we didn’t listen to them for a long time! He just kept asking. Every time we were filming or projecting videos, he wanted to be on the screen, or in front of the camera. He clearly wanted something to happen in that sense.

Manu: So, finally we started filming him… spread out over about a year and a half of shooting.

The method is unusual, because it’s just short video clips – a minute long – that we decided to produce to suit the web, in square format so that it can be circulated everywhere, and the subject is quite particular. When Gil asked that we film him, we tried to develop concepts but he was not interested in any of our ideas. He didn’t want a scenario, what he really wanted was just for us to film him exactly the way he is, in his day-to-day life.

Manu to Gil: You’re going to set the table?

Manu: So we have lots and lots of footage of day-to-day life. We also have many interviews with people who share what Gil means to them. But we have a lot of his daily life… and simply our appreciation of what he brings to us in this everyday life.

Manu to Gil: What do we do when we get together?

Manu: We would really like the web series to help people understand the gifts of people who are different, what they contribute, that they bring us so much – whether it’s to their parents or to the people they see in their workplace or anyone else… To recognize that these people, it’s not… we call it a disability, but it doesn’t make them less. There is a plus in there, where they bring us so much, and it’s absolutely… It’s really unique, what they have to offer the rest of us. That’s also the message of L’Arche by the way, it’s totally unique!

Manu to Gil: We give each other a hug?

Hearing the Request of Our Friend Gil

Sometimes it takes a long time to truly listen to people who express themselves differently, who don’t fulfill roles in society from which they can be heard.

Creating a web series based on ordinary life

Most documentaries are inspired by exceptional subjects or unusual situations. In this film, the camera follows Gil as he goes about his everyday tasks. He completes each job with the same tireless enthusiasm, never giving up.

These days, everyone is rushing everywhere, always seeking more, never feeling enough. Yet, you seem to be content being just where you are, present to people and the moment, and open to wonder.

I did not know Aurèle, but I was sad when I heard that he died. I was sad for him and his family and friends, for his friend Gil, their housemates and their L’Arche community.

Do you have an intellectual disability and dream of being a model? Gil invites you to step onto the stage and participate in our ExpressYourself Contest by posing in front of the camera!

One of Gil’s greatest gifts is his capacity for mutuality in friendships where each helps the other to grow, each brings out the best in the other. When he was young, Gil was fortunate to be accompanied by an extraordinary special educator, François Villemaire, who at the time worked for the “Pavillon du parc”, an establishment that is part of the network of health and social services in Gatineau, Quebec.

What I bring to my community

Why does my heart melt when I see a picture of Gil Frois in my Facebook feed or on larche.ca? I’m either rushing or exhausted, but I jump online to make sure I’m not missing yet another thing… there he is smiling at the camera, or captured at work, or making music. His photo makes me pause and catch my breath.

How can we describe Gil’s music? Innate, intuitive, inspired, free, without reference? Different, for sure!