Journey to the Greatest Gift

In a Gala celebration, L’Arche Daybreak celebrated 50 years of creating the Beloved Community, discovering the sacred in the ordinary stuff of daily life – albeit with magic and space travel thrown in. 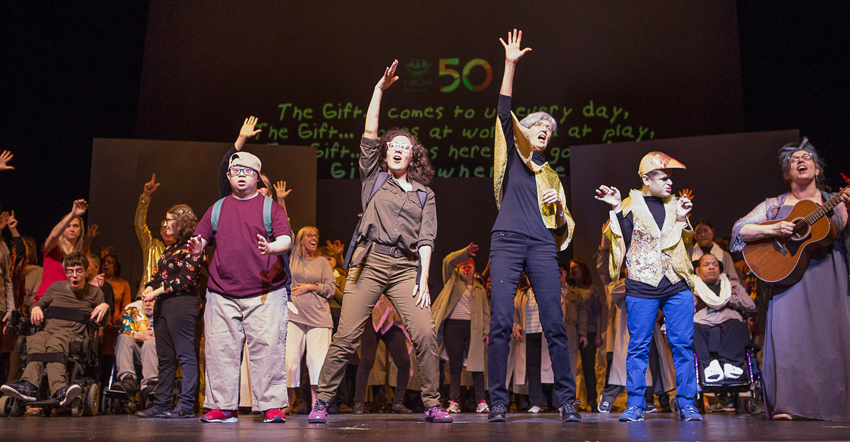 On Tuesday, March 5th, L’Arche Daybreak celebrated its 50th anniversary with a Gala, a glittering party bringing together L’Arche members old and new from near and far, with family, friends, and neighbours representing every chapter in the community’s storied history. With the L’Arche Canada Art Exhibition, a magical theatrical production, and, of course, cupcakes and fellowship, we celebrated the gift that L’Arche Daybreak has been over the course of its joyous, messy, and inspiring journey, and the unique, diverse gifts of all who have contributed along the way.

But this was not an evening to commemorate the past. The core of the Gala was an original theatrical performance that spun extraordinary magic and profound mystery from the ordinary stuff of our daily life together – with a rocket ship thrown in to elevate the journey. Those of us who took part in this journey (believe me, there were no bystanders) lived a deep collective experience of the very gifts showcased in the production: welcome, creativity, compassionate love, spirit, joy (and silliness), forgiveness, and belonging in what Dr. Martin Luther King Jr. spoke of when he called us to become the Beloved Community.

Stephanie Sandberg was commissioned to create this unique stage production employing acting, song, dance, clowning, and visual storytelling. Her core creative team included Evangeline Rose Whitlock, Anna Maclean, Clara Fraschetti, and Warren Pot. They designed the play to showcase the talents of the entire Daybreak community featuring the L’Arche Daybreak Spirit Movers, L’Arche Toronto’s Sol Express, and a cast, musicians, and crew including people of all ages and abilities – including students from Jean Vanier and St. Theresa of Lisieux Catholic high schools and the Mayor! Set design, props, and projection were inspired by original artwork created by L’Arche artists. 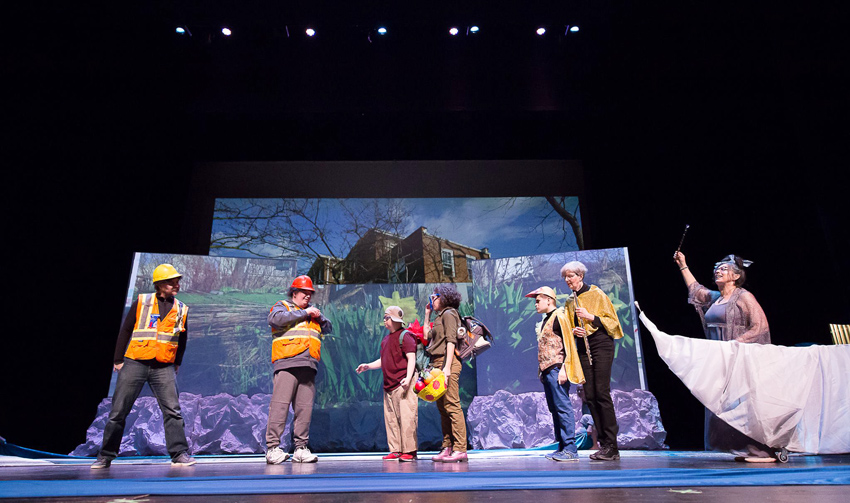 Stephanie described the play, “It’s a quest story of two friends looking for the ‘greatest gift’ and they don’t know how to find it, and everything they do they have to do together in order to find the gift. Sometimes they run into trouble and need help from other people and other creatures in other lands where they have never been before. It shows that journey of life where you find gifts to build your life’s journey along the way.”

“When you create a piece of theatre it is probably the most collaborative art form – the messiness of problems and issues have to come together and create together. There’s incredible joy that comes out, but also you are creating relationships that were not there before. So, the community grows through the experience which is really amazing. 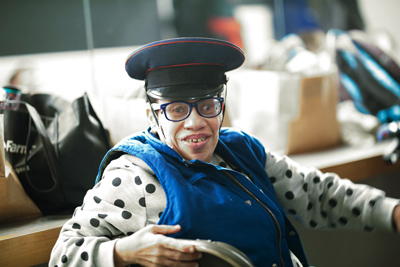 Theatre will draw people’s gift out. When someone expressed a desire to dance, they’ve named themselves as something and put themselves out there in ways they hadn’t before. They discover something in themselves. Or you have people who already have that gift, and they can work on it, practise it, and allow it to be shared. This is a line from the play, ‘The gift of creativity doesn’t mean anything unless you share it.’ So it has to be ultimately given away. Seeing that happen is the greatest gift.

We had to make sure that every single person’s gift is somehow represented. There are people who don’t want to be on stage so how do you represent those gifts? When I was interviewing people last summer, someone told me a story about when Henri Nouwen was here and the community was going through a hard time. He asked everybody to bring a flower and bring it to the altar. Everyone brought a different flower, but when placed together they created this incredible moment of beauty. There’s a flower scene in the play where everybody’s flower is represented. We made sure that every single person had some level of involvement.

Some people’s dreams and ideas gave me ideas for scenes in the play. We’re making their wildest dreams come true. Somebody told me that Mike Arnett really loves to turn his wheelchair into things and he really loves rockets. So we made his chair into a rocket ship. It takes you someplace creatively. People talk about how diversity is the best way to nurture creativity because you have so many different ideas coming together. 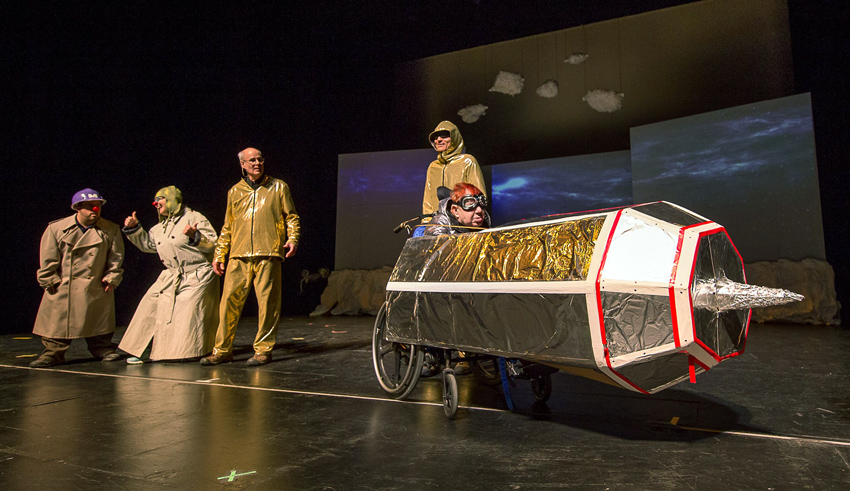 The challenge is limiting it, shaping it into something that’s coherent, that’s a story. The play represents this journey that we’ve gone on to figure out how to bring all our gifts together in a way that tells a story. We could have done a variety show, but the story – and the gathering to tell the story – is the most essential human experience. The audience is the final collaborator. Their creativity in watching it is very important as well. And we bring them in fully; we found a way to include every person in the performance.

For me, the gift is creating theatre in community. Some people say, ‘That’s not professional theatre. Why aren’t you off in your sabbatical doing something professionally in New York on the stage? Why are you going to L’Arche Daybreak to create a piece of theatre in a community?’ For me, the most important stories are from those people who don’t get to tell their stories and do not get to be heard, whose voices are just as important as those who can sing an aria from a Mozart opera. What I’ve learned from this process is that every single person has a beautiful literature inside them, these amazing stories to tell. And to bring out these stories is an amazing experience.”

In the final scene, our two friends, who have become true companions as they have journeyed through many strange lands (and distant planets), have discovered the greatest gift, their own Beloved Community. By wheelchair or on foot, with or without walker, the many people and other living beings they have encountered join them on the stage – even those who made the journey difficult. Each has been transformed by the journey, each takes their moment in the spotlight, shining with their own unique inner and outer beauty, united in their rich diversity. 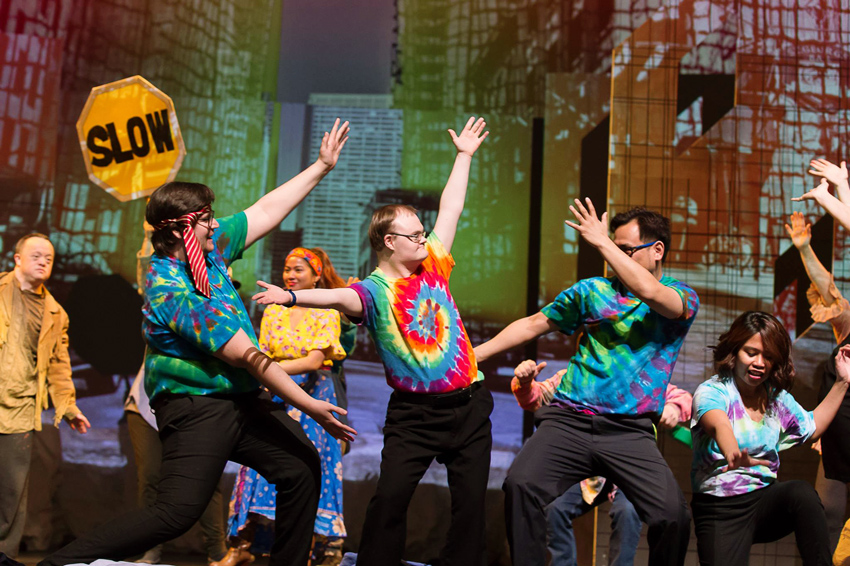 They come together around the table, that icon of belonging, where symbols of all the gifts they have received in the journey are placed in the centre: the shawl of welcome, the flower of creativity, the candle of compassionate love, light-filled cup of spirit, the rubber chicken of silliness and joy, the fruit-filled bowl of friendship. They hold hands in a gesture of forgiveness. Each gift is an ordinary gesture done with extraordinary love.

By the final song, the audience and the performers have become one, joined in a deep communion. This is the Beloved Community, where every person is invited to take their rightful place around the table, becoming the source of healing and new life for themselves and for the weary world that yearns for this gift. 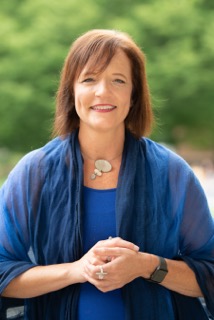 Stephanie Sandberg is a professor of theatre and film studies at Washington and Lee University in Virginia, with a special emphasis on creating theatre and film for social justice. She has worked primarily on theatre and documentary with communities around the world, creating education and social change around important issues such as racism, immigration, sexuality, and now, with L’Arche Daybreak, on recognition of the gifts of people with diverse abilities.