Investing in Justice for Institutional Survivors

Patricia Seth, an institutional survivor, put it this way, “It was like living in a prison. The only thing is, we didn't know when we would even get out.” Inspired by the founding story of L’Arche, L’Arche in Ontario is engaging in Investing in Justice, a series of projects promoting healing and belonging, truth and reconciliation for survivors. 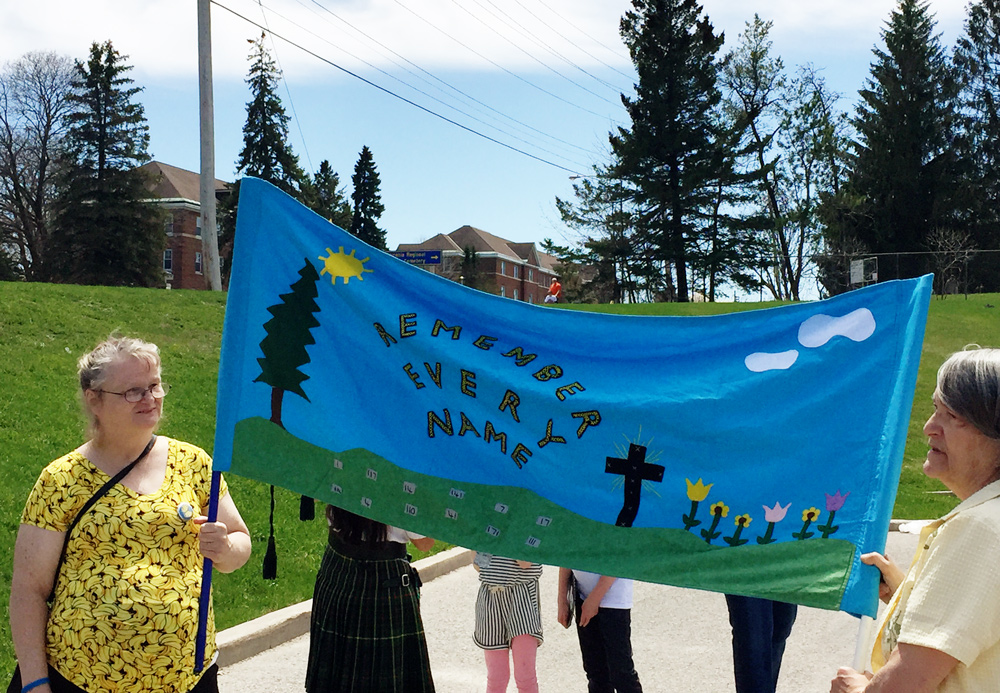 This Mother’s Day was beautiful unlike the cold and damp of the past two years. We gathered in a parking lot around a handmade, replica coffin under a hand-stitched banner proclaiming, “Remember Every Name.” An Indigenous elder smudged the coffin and each of the 50 or 60 people there, connecting us to the sacred. Connecting us also to the Truth and Reconciliation process still unfolding for survivors of the residential schools and other harm done to the First Peoples of this land.

As a bagpiper played, we processed up the hill led by a dozen survivors of the institution for persons with intellectual disabilities that once operated on this hilltop outside the town of Orillia, Ontario. We gathered under the trees around a lawn that is interrupted by a few gravestones revealing its purpose. We gathered to remember those buried here, to listen to the painful memories of the survivors, to pray and sing in different faith traditions. We gathered to commit ourselves to never forget what happened in this place. 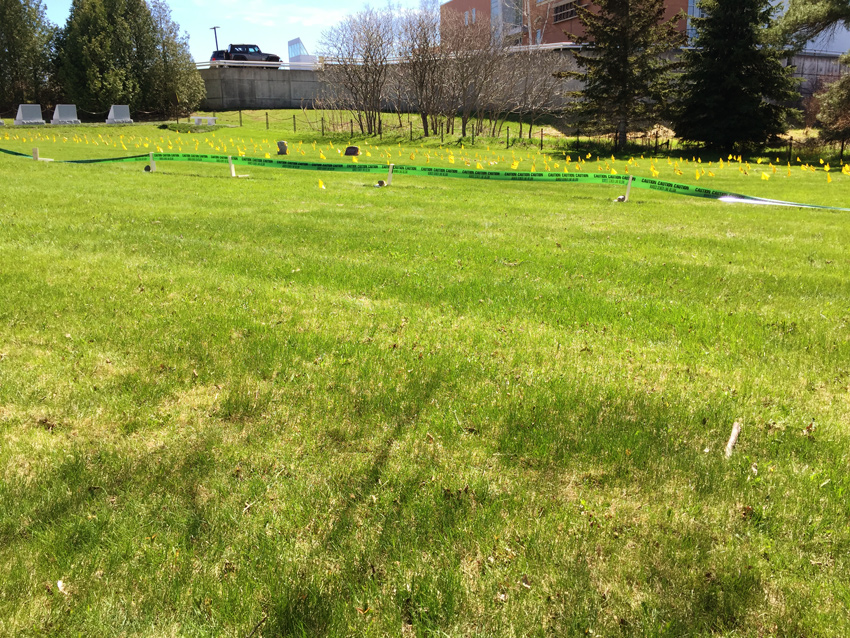 The yellow flags are for the known names of people buried at the Huronia cemetery. The green marks where a sewer line was run through the graves.

Across the lawn, small yellow flags, placed by the organizers of the Lost But Not Forgotten memorial, marked the names of people buried in known graves. Most of the graves here have no names, no birth or death dates, nothing but a short serial number on a small, flat stone. Years ago, many stones were stolen to pave a patio. At some point, a sewer line was run right through the graves. Even in death, there was no end to the indignities committed against the persons buried here.

These are the graves of the abandoned: men, women, and many children who were placed at Huronia Regional Centre never to return home. These sons and daughters, brothers and sisters lived, died, and were buried at HRC, often without a casket, a funeral, or anyone to mourn their loss. It’s a story of people being stripped of their dignity, their humanity, like something from a totalitarian society. But this happened in Ontario in living memory.

The serial numbers were intended to protect the dead from being identified. These centres are always justified by good intentions: to protect and care for our most vulnerable citizens, to relieve their parents of the burden of their care and their communities of the painful reminder of human frailty. Who would argue when doctors, priests, and ministers advised, “Your child will be better off there.” Unfortunately, reality didn’t match the good intentions.

Out of sight, congregated into overcrowded facilities, these vulnerable persons were neither safe nor well cared for. For many years, the institutions were called “Hospital Schools.” But they were hospitals where people were harmed not cured. And schools that taught children harsh lessons through control, deprivation, humiliation, and frequent abuse. One survivor, Patricia Seth, put it this way, “It was like living in a prison. The only thing is, we didn't know when we would even get out.”

An apology and the importance of remembering

In 2013, the government of Ontario was mandated in a court settlement to apologize to the men, women, and children forced to live in these provincially run institutions. Each of the party leaders spoke in a rare moment of unity and non-partisanship. In her thoughtful speech, Premier Kathleen Wynne said, “Their humanity was undermined; they were separated from their families and robbed of their potential, their comfort, safety, and their dignity.”

These words are a haunting parallel to the treatment of children in the residential schools (with important differences such as eradication of indigenous cultures and intergenerational impact). On CBC Radio’s The Current (March 2017), Senator Murray Sinclair, the chief commissioner of the Truth and Reconciliation Commission, spoke about the importance of remembering the harm caused by government-funded institutions.

A painful path to truth and reconciliation

The apology was mandated in the $35M settlement of the class action lawsuit brought by survivors of Huronia, Rideau, and Southwest Regional Centres. (A second lawsuit involved residents of 16 smaller facilities). Because of the settlement, there was no trial where survivors or their families could be heard. Unlike the residential schools, no Truth and Reconciliation process was mandated where stories could be told and the public educated about what happened to the residents of the institutions. 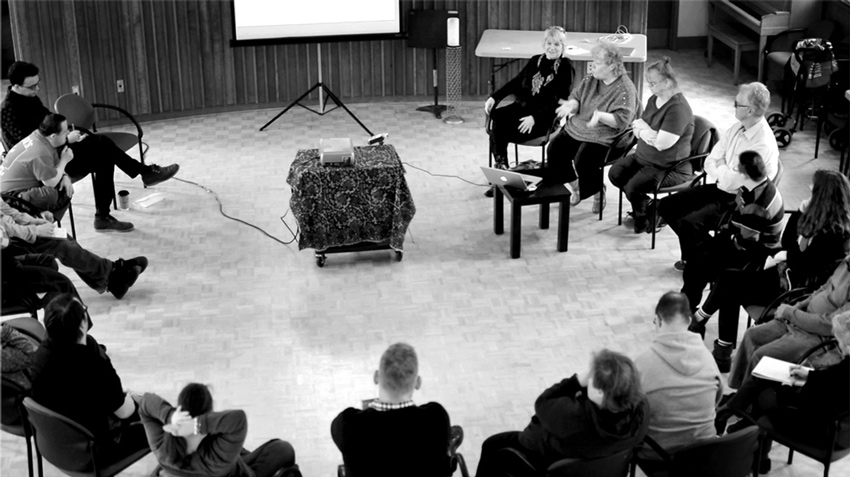 After a complex, often-painful claims process – where survivors or their families had to prove the degree of abuse and relive painful, often re-traumatizing memories – over $7M of the fund remained. The court designated these funds as the Strategic Program Investment Fund (SPI). Groups were invited to propose projects to benefit survivors, and 32 projects were chosen from the 80 submitted. The survivors and their allies named these projects, Investing in Justice, an indirect pathway to some measure of truth and reconciliation.

Reclaiming the Founding Story of L’Arche

L’Arche began when Jean Vanier welcomed Raphaël Simi, Philippe Seux, and other men who lived in institutions to share life with him. Philippe recalled, “Jean took me out of a centre where I had been placed by social workers. It had been desolate there. We were always inside, surrounded by four walls. There was nothing to do. We were bored stiff; there was no life. I even cried. When I came to L’Arche there was no electricity -we used candles for lighting. It was fun! There were no toilets or showers, but I felt like I was exploding with joy.”

For over 50 years, L’Arche communities have supported institutional survivors to come home. Over time, through relationships and sharing life in community as well as more formal therapies, these members have learned to trust, to discover their hopes and dreams, and to risk following them. Showing remarkable resilience, survivors have added new chapters to their life stories. These journeys, each unique, rarely easy, are woven into the very fabric of L’Arche.

Conscious of our story and the members of our communities who lived this journey, L’Arche Ontario felt called to participate in Investing in Justice. With the support of the Regional Council, two communities submitted or were part of five submissions that were accepted for funding.

L’Arche London is partnering with Participation House Support Services, Hutton House, and the London Arts Council in Healing through the Arts which honours the resiliency and spirit of survivors through six-week “open studios” where participants celebrate each other's gifts through arts activities drawn from their stories, experiences, and ideas in an atmosphere of conversation, encouragement, and freedom of expression. 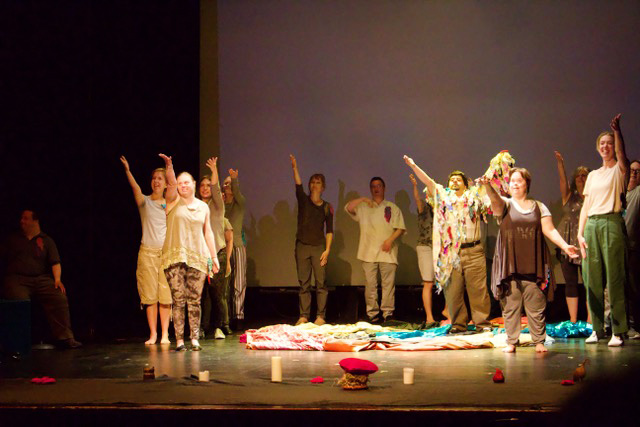 Birds Make Me Think About Freedom at the Toronto Fringe Festival. (Photo by Toinette Parisio)

L’Arche Toronto is also supporting Lost But Not Forgotten, the annual memorial for the people buried in the HRC cemetery in Orillia. The group, part of Remember Every Name, is also researching the cemetery seeking the truth about what happened there.

Steps to truth and reconciliation

We hope that being listened to in a safe and supportive environment, finding creative expression, and taking a lead in their communities will help survivors to continue to heal and live meaningful lives as they carry their experience.

We believe that these projects will help us remember what happened and what continues to happen in institutions when society separates vulnerable persons from their families, friends, and communities “for their own good.”

We are committed to educating people not only to prevent these abuses, but also to welcome and celebrate the unique gifts of persons with intellectual disabilities who have so much to contribute in shaping a more human society.